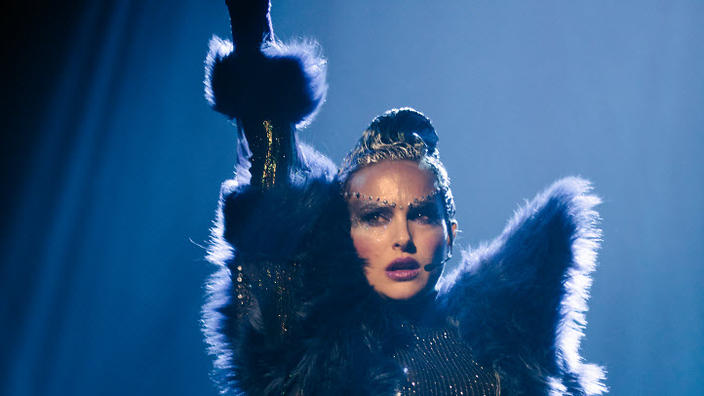 The sequence at the early start of Vox Lux is one unfortunately too familiar. One disturbed student enters a classroom with a gun in hand and nothing but hatred in mind. One of the bullets fired on the day lodged itself in the spine of young Celeste, who was turned into a symbol for the grieving community. Her voice, in the form of a touching song, sends the girl into the eye of the media hurricane. A beat later and Celeste has an agent and a record label, travelling around the world with her older sister, carefully planning every step of her then early career.

It doesn’t take too long for Celeste’s youthful innocence to be corrupted by the industry. We closely follow the evolution of her character during the film’s Prelude and First Chapter. Celeste goes from being a sweet, confident schoolgirl to a confused teenager with too much on her plate, binging on alcohol and struggling to understand the trauma she had undergone, having had no time to fully process it before being catapulted into precocious stardom.

The scars of her unconventional life take a tow on Celeste’s mental health and by the time we are introduced to her adult self, portrayed by Natalie Portman, she is nothing short of pure chaos. The film’s second chapter explores the effects of fame and intense distress as we see this wrecked pop star dealing with yet another tragedy, press conferences, and family drama. Portman takes her performance to an extreme, skilfully navigating in between anger and vulnerability, never toning it down.

The character the Oscar-winning actress brings to the screen is the perfect allegory of modern celebrity status: we do not need to have reasons to love you in order to do so. We will consume you, and obsess over you, regardless of what you might say or do. Celeste is not likeable or even tolerable, once she is onstage; we eagerly wait for the appearance of a perfectly rehearsed alter ego, something that works with the crowd. Instead, we get the shell of someone who wishes for nothing more than not being there.

Vox Lux proclaims itself to be “A 21st-century portrait”. Maybe there is nothing that represents our current pop culture more than a cocktail of pain medication, heavy drugs, and fragile mental health – all right under the unforgiving frenzy of the spotlight. Fame comes at a cost, but is it worth it after all?